We have the honor and pleasure of revealing to Thrillerfix readers for the very first time the brand new cover for Peter Clines' upcoming release, The Broken Room, launching March 2022. You can pre-order your copy now and be one of the first ones to read Peter Clines' latest supernatural thriller that's promising to be a classic.

Keep scrolling to feast your eyes on this gorgeous new cover! 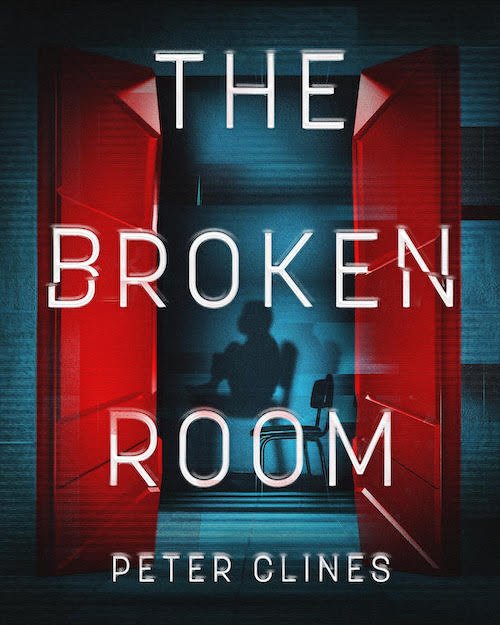 TFx: What’s the significance of the title?

Clines: It’s kind of a double meaning. On one level, it’s a key location in the story, a testing chamber where people are experimented on. But it also refers to the two main characters in the story—Hector and Natalie—being broken emotionally and physically.

TFx: When did you come up with the idea for this book, and what can you tell us about the plot?

Clines: I think it was about two years ago at this point. I spend some of my Saturdays watching B-movies, and I saw one that began with a young woman walking into a bar and focusing on this older, rough looking guy on the other side of the room. The movie’s description had been kind of vague, but I suddenly had all these ideas about how this scene was going to play out.

Maybe the guy was a spy, and the woman was here to call in a marker from an old spy buddy. Why wasn’t he cashing in the marker himself? Because he was dead, and she could talk to his ghost. And somehow, some people had discovered this and wanted to get to her to learn everything the dead spy knew about... something. So this old drunk guy was going to have to help her.

Well, the movie didn’t go that way, but my version of the story stuck with me. The idea of this badass guy slowly drinking himself to death in a dive bar who gets confronted by the ghost of a former work associate. And I can’t remember what shifted in my head but one day I realized, no—it’s not a young woman who shows up looking for him. It’s a girl.

A little girl barely into double digits who’s basically got retired Jason Bourne stuck in her head. And, as sometimes happens, I just sat down and wrote out the first four chapters over two days No outlines, no plans, nothing. It just sprung out almost exactly as it is in the final book.

Clines: It’s pretty important to me. I mean, all of us tweak stuff when we’re writing, it’s kind of inevitable, especially in genre fiction. But I love getting the little details right. It feels great to get messages from people in the military or scientists or doctors and hearing that I nailed this bit of dialogue or that kind of interaction, or that I knew this odd bit of trivia.

Weirdly enough, I think that’s the stuff people focus on. I can say WWII ended in 1951 and people will just shrug and assume secret timeline or alternate reality or something like that. But say a Luger pistol can hold ten rounds plus one in the chamber and you’ll get a couple hundred people lecturing you about getting the facts wrong.

TFx: What were your first thoughts on seeing the cover?

Clines: We worked through a couple different ideas. And by “we” I really mean the cover artist, Alex Cruz, and the folks at Blackstone. I’m very aware that I don’t have the artistic eye or the marketing savvy for a good cover, but they kept me in the loop and listened politely to my thoughts (even when my thoughts were just slowing everything down).

Then Alex came up with this design and as soon as I saw the little girl’s shadow I just loved it. I think a lot of great cover art has a “second look” quality to it, where you get a first impression, but then when you look close and take in all the details you realize there’s something else going on. I always love that.

TFx: What are you reading right now, and what good books have you read lately?

Clines: At the moment I’m in the middle of Cassandra Khaw’s The All Consuming World and really enjoying it. Before that was Project Hail Mary by Andy Weir, magnificent, of course. Finally started reading the Murderbot books by Martha Wells and they’re fantastic. I absolutely loved King Bullet. Richard Kadrey’s final Sandman Slim book. My to-read pile is huge and there’s a bunch of stuff I should’ve read months (or years!) ago that I’m hoping to finally get to over the holidays.

Clines: I’m about 20,000 words into something my agent and I have talked about for a while and it finally seemed like a good time to do it. I don’t want to say too much, but it’s about a bunch of astrophysics grad students who get caught up in their professor’s pet project. His childhood obsession, really. It’s got cyborgs, an alien, Neanderthals, a robot butler, and mysterious obelisks. And dinosaurs. Lots of dinosaurs

TFx: Tell us something fun about you that readers might be surprised to know.

Clines: Fun? Well, that’s going to limit things right off the bat... Ummmm, I was in one of the first groups of kids to attend Space Camp back in ‘84? I got to play the murderer once in a horror movie, and a monster on a sci-fi sketch comedy show? I’m not sure if these are fun or not. Mildly interesting trivia, maybe?

Hector was the best of the best. A government operative who could bring armies to a halt and nations to their knees. But when his own country betrayed him, he dropped off the grid and picked up the first of many bottles.

Natalie can’t remember much of her life before her family brought her to the US, but she remembers the cages. And getting taken away to the Project with dozens of other young children to become part of their nightmarish experiments. That’s how she ended up with the ghost of a dead secret agent stuck in her head.

Now Hector and Natalie are on the run from an army of killers sent to retrieve her. Because the people behind the Project are willing to risk almost anything to get Natalie back and complete their experiments.