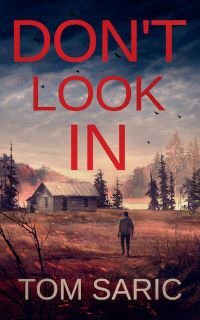 Hold on to your seat. This psychological suspense by Tom Saric takes you to the small rural town where Gus Young now calls home, hoping the remote life will expel his demons. Once a renowned psychiatrist, Gus gave everything he had to his patients and his work, which unfortunately led to the demise of his marriage and family.

Divorced, then rebuffed by his daughter, Gus is living out his penance as a recluse in the cabin he built for himself out in the woods.

In order to make ends meet and cull a small salary that he sends anonymously to his daughter, Gus has set up shop in the back of a local hardware store where he meets with his patients. Some have more than their share of issues and even have posed threats to the locals and to Gus. But he takes it all in stride until one of his clients turns up dead and his cabin is burned. Wanting answers and trying to come to grips with his recent loss of memory, Gus is determined to find the killer and uncover any culpability on his part. Seeking justice, he sets a trap for the killer and finds himself, along with his friends and daughter, in mortal danger.

Clearly a lot of sweat equity went into this read as the author weaves his expertise into a thriller’s must have ingredient—a peak into the darker side of humanity. Secondly, I’ll applaud the character arc. Gus is so three-dimensional and clearly intent on trying to right his past wrongs that you root for him from the start, knowing full well his way behind the eight-ball here. And as Gus aptly describes the motivations behind each of his client’s behaviors, you get a rare peak into their misguided thinking and disturbing rational, making them all candidates for the killer. That in itself is fascinatingly suspect yet set alongside a quirky supporting cast and a violent patient portfolio, I was hard pressed to unravel the offender let alone their impetus.

As the plot thickened, I realized that I was holding my breath more than once throughout my read. So, for me, that makes Don’t Look In a five-star read in my book.

If you want to be the first to hear about all of Tom Saric's upcoming releases, why not join the Thrillerfix community? It's free to sign up and you'll start getting recommendations for new releases and discounted ebooks from our expert editorial team, from bestsellers to hidden gems.

THRILLERFIX ALL-STAR REVIEWER: Kimberly Charleston from Books Uplift  has written over 23 books, some published and others on their way to print. Her books range in genres from mystery and suspense to young adult and historical. If you enjoy novels of mystery, suspense, and historical, you'll want to follow Kimberly Charleston's book recommendations here on the Thrillerfix blog.

Previous Post The Best Thrillers of July-September 2020 Next Post Review: The Patience of Karma by Cynthia Hamilton