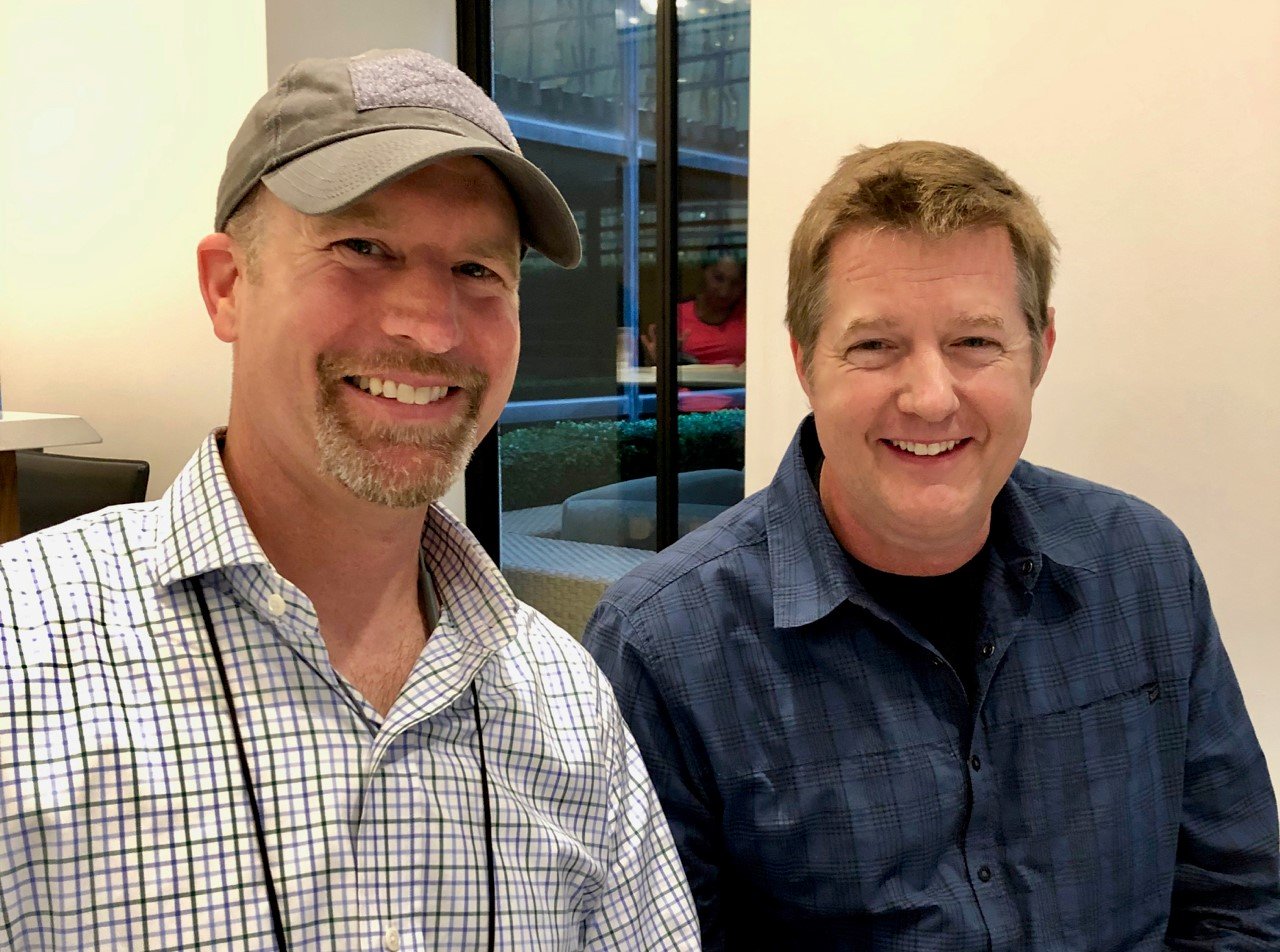 Author biography: Wall Street Journal bestselling author Brian Andrews is a US Navy veteran, Park Leadership Fellow, and former submarine officer with degrees from Vanderbilt and Cornell Universities. He is the author of three critically acclaimed high-tech thrillers: Reset, The Infiltration Game, and The Calypso Directive.

Wall Street Journal bestselling author Jeffrey Wilson has worked as an actor, firefighter, paramedic, jet pilot, and diving instructor, as well as a vascular and trauma surgeon. He served in the US Navy for fourteen years and made multiple deployments as a combat surgeon with an East Coast–based SEAL team. The author of three award-winning supernatural thrillers—The Traiteur’s Ring, The Donors, and Fade to Black—and the faith-based thriller War Torn, he lives with his wife, Wendy, and their four children in southwest Florida.

TFx: Where did you come up with the idea for "Red Specter" and what can you tell us about the plot?

Jeff: RED SPECTER is the fifth book in the Tier One series and so the idea was born from the series arc that comes before it. In American Operator, we transitioned from what we call our ‘Persian Trilogy’ in books 1-3, to a new threat we see in the headlines everyday—Russian and her increasing belligerence and aggression throughout the world. Russia has always been a master at false flag operations and covert ops designed to destabilize democracies, foreign countries, as well as relationships between international partners, and we explore this Russian modus operandi in this next trilogy arc.

In AMERICAN OPERATOR, we introduced the reader to the existence of a secret Russian black ops unit that mirrors the capabilities of Task Force Ember. In the last book, Zeta was working to destabilize America’s relationship with Turkey and undermine American standing with the Kurds. In RED SPECTER, the tables turn and Zeta becomes aware of Ember’s existence. For Ember, this is truly challenged because the for the first time they are facing an enemy every bit their equal, not only in training and skill, but in technology and political power..

Brian: In America, we talk a lot about “win-win” solutions, cooperation, and seeking mutually beneficial outcomes. The Russian mindset is not the same as the American psyche. For the Russian powerbrokers, politics and business are a zero sum game. For Russia to gain power, others must cede it. For Russia to rise, other nations must fall. This mindset is often misunderstood or ignored to one’s peril when dealing with the Russians, and it has profound strategic and tactical implications for US foreign policy and covert operations. In Red Specter, The Russian Vory are a metaphor for the Russian defense-industrial complex. If you wrong a Vory, he will retaliate. If you wrong the Russian President, Russia will retaliate. This vengeance pact is so strong, that Russians are known to “burn their own house down” if that what it takes to scorch their enemy.

TFx: How did you choose the Baltics and Russia for the setting?

Brian: Great question! The Baltics are a geopolitical tinderbox because of their history as former Russian occupied states and their current standing as NATO members. Any act of Russian aggression against any of the Baltic countries that could be considered an act of war, would be an act of war against NATO. The inciting event in Red Specter is when an LNG import terminal in Klaipeda blows up after a gas dispute between Russia and Lithuania. The Director of National Intelligence (Kelso Jarvis) suspects foul play and dispatches John Dempsey and Task Force Ember to investigate. What they discover is chilling, a Russian false flag operation made to look like an industrial accident to cripple Baltic gas imports and force them back into the arms of Gazprom.

Jeff: Like Brian said, the Ember team is the most lethal direct action covert operations team we have, and they go where the threat is. Yes, we wanted to show some current event type geopolitical intrigue, which we began in AMERICAN OPERATOR and Russia’s involvement with Syria and Turkey, but we also want to show the amazing capabilities of the American Intelligence and special operations operators. Here we showcase operations where ‘denied area’ means far more than in the books that have come before.

Jeff: As you know, Brian and I are both Navy veterans and it has been our absolute greatest honor to serve beside true American heroes and believe me I do not use that very overused term lightly. In my case, I had the privilege to deploy to war with an east coast based SEAL Team, and the men and women I served with in NSW have inspired me in every aspect of my life and are the real inspiration for these characters. From the beginning, we set out to create characters that would honor the real life warriors we have known and would show what I consider to be most remarkable about them—and that is how ordinary they are. These men and women truly are ordinary, every day Americans who are amazing only for their extraordinary drive to do seemingly impossible jobs for their country and for one another. I hope that some of our friends will see themselves in the Amalgams that Dempsey and his team really are.

Brian: The TIER ONE series is unique in the genre because it is structured longitudinally as consecutive trilogies. In each trilogy, we develop a “cast of villains” who are challenging the United States on a macro-scale while engaging John Dempsey and his team at the micro-level. When creating a cast of characters, we always use hierarchy—with POV characters at the top, middle, and bottom of the ladder—so that the reader is treated to a 360 degree perspective of the issues and conflicts at stake. From the President in the Oval Office, to the task force director in the Tactical Operations Center, to the special operator in the field, our novels cover the full spectrum of decision making and job activities that is covert operations in the modern era. Then, we take things to the next level, by pitting our protagonists against matching villains in a mirror-image antagonist hierarchy—President versus President, Director versus Director, Operator versus Operator—with these multiple subplots unfolding
simultaneously.

For example, in RED SPECTER, on “team Russia” we have Arkady Zhukov a legendary spymaster and stratego squaring off in a game of wits against the Director of National Intelligence, Kelso Jarvis. There’s Valerian Kobak, a Russian assassin and operator, who has a vendetta to satisfy against our former Navy SEAL turned spook hero John Dempsey. And finally, there’s secret Russian agent Catherine Morgan who’s pitted against fellow ODNI staffer Petra Felsk in charge of conducting a mole hunt. As the novel unfolds, the reader learns the personal and professional histories of these three Russians with the same degree of intimacy shared on the American side of the story. They’re real people, with skeletons in the closet, emotional baggage, and uncertainty in their relationships and future. During the course of the novel, all three antagonists—Arkady, Valerian, and Catherine—experience crises of identity, purpose, and self-preservation.

Brian: 2019 has been a great year for thrillers. Two summer standouts were Red Metal by Mark Greaney and Rip Rawlings and Jack Carr’s True Believer. While very different novels, both books were action-packed and brimming with suspense. On the science fiction front, I read Children of Ruin by Adrian Tchaikovsky, and it was ground-breaking in many respects when contemplating terraforming and alien intelligence. On the advance reading front, I had the privilege of reading an advance copy of Army veteran and friend Don Bentley’s debut thriller Without Sanction. All I can say is wow, buckle up because what a tremendous novel by a tremendous new talent; I can’t wait to see what the readers think!

BOTH: I agree with Brian—there has never been a better time to be a fan of the thriller genre for sure. There are so many amazing series out there now and we love being part of this community of readers and writers. I could write two pages on the great thrillers I’ve read this year, but if I keep it to just my most recent reads, then my top two are Without Sanction by Don Bentley and ​The Treadstone Resurrection by Joshua Hood. I like Brian, I too had the honor of reading an advanced copy of Without Sanction and I can tell you without a doubt it will be one of the best debut thrillers of 2020. Don is an amazing writer. And the much anticipated Treadstone series, coming in February, is written by my good friend Josh Hood. Josh is a veteran and writes with the absolute authority of someone who has seen combat first hand. He is a true master of this genre.

BOTH: We have lots of exciting news on that front to share! First, look for Book 6 in the Tier One series late next year, which will be the final installment in our Russian Trilogy and give Dempsey and the team at Ember an opportunity take the battle with Russia to the next level—unfortunately, that’s about all we can say with spoiling RED SPECTER! In other news, we signed a three book deal with Blackstone Publishing’s Rick Bleiweiss for our new series, Sons of War. This series will feature Tier One fan favorite Lieutenant Commander Keith “Chunk” Redman and his team of fellow SEALs as they bring back to the life the Navy Tier One SEAL Team that was wiped out in the ambush in Yemen in the first Tier One novel. Chunk has made guest appearances in several books, including War Shadows, Crusader One, and our latest Red Specter and we get so much mail about making him a bigger character in the Tier One world. Well, consider it done as Chunk and his boys will be front and center in this new series, with Sons of War coming early 2021!

It’s strike—and counterstrike—as John Dempsey takes the fight to the Russians in a riveting Tier One Thriller by the Wall Street Journal bestselling authors of American Operator.

When shadow warrior and former Tier One Navy SEAL John Dempsey goes undercover to meet with a Vory arms dealer, he thinks he’s laying the groundwork to penetrate the Russian criminal underground. Instead, he walks into a trap orchestrated by Zeta, the secret Russian task force behind a recent assassination attempt on the US President. For Dempsey and his team, the only way out is to lay waste to the Russians, putting a target on Ember’s back.

With Ember pitted against Zeta, a dangerous game of strike and counterstrike ensues—sanctioned in the halls of the Kremlin and the White House but disavowed to the world. As the line between espionage, counterterrorism, and spec ops blurs, Ember is ordered to eliminate their ultimate adversary, which means taking the fight against Zeta to Russian soil. But like a phoenix risen from the Cold War embers, Zeta is more capable than anyone imagines, and the Russians retaliate with an operation that will find Dempsey and task force Ember battling for survival.