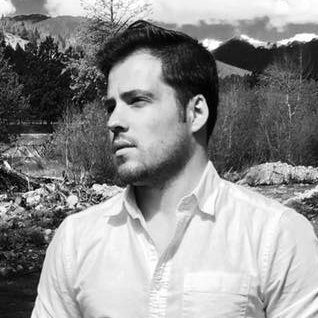 He worked for Iowa Homeland Security and Emergency Management in disaster mitigation before switching careers to focus on storytelling.

When he isn't writing or daydreaming about the apocalypse, he enjoys running, biking, spending time with his family, and traveling the world. He is an Ironman triathlete and lives in Iowa with his wife, their dogs, and a house full of books.

Smith: I wanted to write a story that hadn’t been told before, and while that is almost impossible, I think I did come up with a unique concept with Hell Divers. Five years ago, there were a lot of stories about survivors of an apocalyptic event living underground, or in outer space, but not that many about survivors living in the sky. I decided to base my storyline twenty thousand feet above the surface. I knew I would also need a plot on the surface that would be driven by characters that eventually became Hell Divers.

As the story progresses the divers discover more about the past and the war that ruined the surface. Eventually, they realize the only way for humanity to survive is to find a habitable region, and that’s really what this series is about, along with the threats at every single step of their journey.

Smith: I’m working on a book eight but also considering a spin-off that would open the world up to the divers and their allies. There are some interesting routes I believe I could take the storyline.

Smith: I’m also working on an artificial intelligence story that is kind of a cross between The Matrix and The Terminator. The series will take place on the Moon and on Earth.

TFx: Hell Divers is narrated by R.C. Bray, who is a huge name in audio these days. Do you write the books with his narration in mind?

Smith: Readers often ask me this, and I often see other authors answering yes, they write with audio or a specific narrator in mind. At first, I wasn't sure what to think, but now, based on having RC Bray narrate, Hell Divers, I do think of how he will voice a character. That does not change how I write the character, but I can visualize the way he might bring them to life.

TFx: What elements are needed to make up a good post-apocalyptic tale?

Smith: A unique premise, and compelling characters are the two ingredients to a great recipe for a post-apocalyptic tale. There are infinite possibilities for plots, but they almost all revolve around characters trying to make it through an apocalypse, or the aftermath. The best stories are those where the reader engages the book in such a way they feel like they are one of the characters fighting for survival and ask themselves, "What would I do?"

TFx: Why do you include dogs as characters in all your books?

Smith: Dogs are the most loyal companions on this planet and I love including them in my books for two reasons. One, they have their own personalities that make them unique characters. In Hell Divers, Miles is the companion of Xavier 'X' Rodriguez, and becomes his one and only friend on his ten year journey across the wastes. Two, most dogs know how to survive in the wild and have instincts that humans do not have. In my novels, I include them to help the protagonists survive, and in some cases, to hunt or evade the antagonists.

Smith: I’m reading The Wasp That Brainwashed the Caterpillar by Matt Simon, a non-fiction book about very interesting creatures. For Fiction, I’m reading Devolution by Max Brooks. A few good books I’ve enjoyed this past year include CyberSpace and Meet Your Maker, both by Matthew Mather. Broken by Don Winslow was fantastic. He is the King of crime thrillers, in my opinion. I also enjoyed Novice Gods, a novella by Bobby Adair.

They dive so humanity survives …

More than two centuries after World War III poisoned the planet, the final bastion of humanity lives on massive airships circling the globe in search of a habitable area to call home. Aging and outdated, most of the ships plummeted back to earth long ago. The only thing keeping the two surviving lifeboats in the sky are Hell Divers—men and women who risk their lives by skydiving to the surface to scavenge for parts the ships desperately need.

When one of the remaining airships is damaged in an electrical storm, a Hell Diver team is deployed to a hostile zone called Hades. But there’s something down there far worse than the mutated creatures discovered on dives in the past—something that threatens the fragile future of humanity.