Rhett C Bruno is the USA Today and Washington Post Bestselling & Nebula Award Nominated Author of 'The Circuit Saga', 'Children of Titan Series', 'Buried Goddess Saga', 'Vicarious', 'The Roach', and 'The Luna Missile Crisis' (Audible Originals); among other works.He has been writing since before he can remember, scribbling down what he thought were epic stories when he was young to show to his friends and family. He is currently a full-time author and publisher living in Delaware with his wife, daughter, and dog Raven. 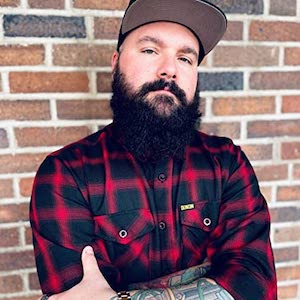 Jaime Castle hails from the great nation of Texas where he lives with his wife and two children and enjoys anything creative. A self-proclaimed comic book nerd and artist, he spends what little free time he can muster with his art tablet.

Jaime is a Washington Post and #1 Audible Bestseller, Audible Originals author (The Luna Missile Crisis, Dead Acre) and co-created and co-authored The Buried Goddess Saga, which includes the IPPY award-winning Web of Eyes.

Bruno & Castle: The idea of James Crowley and the Black Badge started with the character’s voice nagging at our brains. From the beginning, he was talkative and had both a past and a personality. Those ramblings turned into a novella called Dead Acre, an Audible Original exclusive that grew in popularity to a degree we couldn’t have imagined.

Narrated by Roger Clark (Red Dead Redemption 2), it exploded, reaching hundreds of thousands of readers and rising to the number one Audible Plus book in just three days. But James wasn’t done talking…

Cold as Hell felt like a story that already existed but just needed to be written. A trio of bank robbers with varying powers created a mystery for Crowley to solve while dealing with the oft-ambiguous commands from his angelic handler, Shargrafein, and the White Throne.

We’ve written around ten books together, but this series has proven to be the most effortless, as the first-person perspective lends itself to sort of becoming the character and we both have a strong sense of who that man is.

Bruno & Castle: Everyone loves a good western, though they might not even realize it. From old Clint Eastwood flicks to the Mandalorian, storytelling in all mediums continuously find themselves leaning on the badass loner hero with a heart of gold.

There’s nothing more fun than being able to scratch that itch in writing that allows you to wax poetic and westerns grant you that desire. Couple that with an epic war between Heaven and Hell, and this setting was a no/brainer for us.

TFx: What is the significance of the title?

Bruno & Castle: Unlike the Biblical account of Hell being filled with fire and brimstone, in Crowley’s world it is cold and bitter like Lucifer’s heart. Demons who access the powers of the underworld manifest those abilities in icy forms. Cold as Hell is a play on words, as will be all the titles of the series.

Bruno & Castle: Jaime is reading the Dresden Files for the umpteenth time. It’s a fallback when he needs a pallet-cleanser. He listens to about 150 books a year but Jim Butcher always delivers no matter how many times he reads those books.

Rhett just finished Legends and Lattes by Travis Baldree and is watching Sharktank to learn how to better devour the industry.

Bruno & Castle: Next up is Black Badge book two, titled Vein Pursuits. Crowley finds himself in a new land reminiscent of New Orleans, facing vampiric foes the likes of which he has never encountered.

TFx: Do you believe you should never judge a book by it's cover?

Bruno & Castle: Absolutely not. Your cover is the first sales opportunity. We work painstakingly to create covers that sell the book. We often say “covers sell books, not stories”. It’s less important for us to perfectly represent the story on a cover as it is to create a dynamic marketing tool. It just so happens that Cold as Hell checked all those boxes.

We wonder how many amazing books exist with terrible covers. For us, we will never know.

TFx: What was the hardest scene to write in this book?

Bruno & Castle: There’s a shootout toward the end of the book we rewrote several times. About 50 folks are all converged on a bank that’s under siege. Writing a cohesive and comprehensive account of everything going on from first person was exhausting and challenging but we believe it’s the strongest scene in the book.

TFx: Had you always wanted to be a writer?

Bruno & Castle: Jaime has been everything from a touring musician to a pastor before writing full-time. However, he remembers writing his first short story on his grandfather’s Tandy 1000 around 8 years old. He’s always written fantasy books and always enjoyed it. He didn’t expect it to be a full-time job though.

Rhett has always wanted to write though he says he likes have writ more than the writing process itself.

Bruno & Castle: Depends on the book. For Cold as Hell it was imperative. We needed to mail the authenticity of the era. That included Google, physical books for reference, and hiring an American Historian to review the book before ever turning it into the publisher.

TFx: Tell us something fun about you that readers might be surprised to know?

Bruno & Castle: Besides writing together, we own one of the fastest growing and largest indie book publishers in the world. Aethon Books started in 2018. Despite working so closely together, we have only met in person 3 times.

Get Bruno and Castle's latest release, Cold as Hell out now on Amazon. 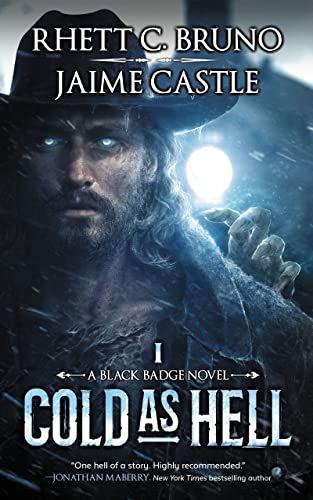 In the West, there are worse things to fear than bandits and outlaws.

Demons. Monsters. Witches. James Crowley’s sacred duty as a Black Badge is to hunt them down and send them packing, banish them from the mortal realm for good.

Shot dead in a gunfight many years ago, now he’s stuck in purgatory, serving the whims of the White Throne to avoid falling to Hell. Not quite undead, though not alive either, the best he can hope for is to work off his penance and fade away.

This time, the White Throne has sent him to investigate a strange bank robbery in Lonely Hill. An outlaw with the ability to conjure ice has frozen and shattered open the bank vault and is now on a spree, robbing the region for all it’s worth.

In his quest to track down the ice-wielder and suss out which demon is behind granting a mortal such power, Crowley finds himself face-to-face with hellish beasts, shapeshifters, and, worse … temptation. But the truth behind the attacks is worse than he ever imagined …